The Pointer is known as the Cadillac of bird dogs. The Pointer is a medium to large-sized breed of dog, developed in England as a gun dog. Pointers can be stubborn, but they are highly intelligent and learn quickly when presented with firm, consistent commands and rewarded for correct behavior. Pointers were originally bred to point birds. Pointing refers to the dog alerting its owner of the location of prey. To do this, they stop, freeze, and aim their nose in the direction of a bird, letting their owner know where they could find the birds they were hunting. While the exact date pointers were first bred is unclear, they date back to at least the 16th and 17th centuries. 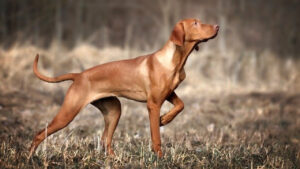 Pointers are a mid- to large-sized dog breed. Males are typically between 25 and 28 inches tall and weigh between 55 and 75 pounds. Females are a little smaller than their male counterparts and are generally between 23 and 26 inches tall. Females weight between 45 and 65 pounds. At the age of 3 months, a female pointer puppy will weigh somewhere between 14 and 25 pounds, while a male puppy will weigh between 16 and 28 pounds. Pointers are fully grown by the time they are 16 months old.

Pointers are extremely gentle, even-tempered dogs, known to be placid, and noisy but harmless guard dogs. Incredibly, it is believed that the primary reason for the introduction of Setter genes into the bloodline was to deal with a tendency towards ‘ferociousness’ in the Pointer in the 19th century. It is hard to believe this was ever an issue, given the nature of the modern breed. Indeed, it is more likely for a Pointer to be timid and reserved rather than to show any signs of aggression towards humans or dogs.

Pointing dogs may have descended from dogs from Spain, specifically of the Old Spanish Pointer (Furgus, 2002). Pointing dogs were originally used by hunters who netted the game. The dog would freeze or set (as in Setter) and allow the hunter to throw the net over the game before it flushed. Flushing dogs, on the other hand, were often used by falconers to flush game for the raptors. Most continental European pointing breeds are classified as versatile gun dog breeds or sometimes HPR breeds (for hunt, point, and retrieve). The distinction is made because versatile breeds were developed to find and point game as all pointing breeds, but were also bred to perform other hunting tasks as well.en.wikipedia.org

It’s highly likely that the Pointer made his way to America with early colonists, but his presence isn’t really documented until the Civil War era. Sensation, a handsome lemon and white Pointer imported in 1876 from England, is the emblem of the Westminster Kennel Club, which was founded in 1877. If you’ve ever been fortunate enough to attend the Westminster Kennel Club show, you’ve seen Sensation’s silhouette on the cover of the catalog.